skip to main | skip to sidebar

Stacy Jones! Why you got to follow in Jay Laga'aia's footsteps by using your loveable, trustworthy, brown visage to front for the money men? 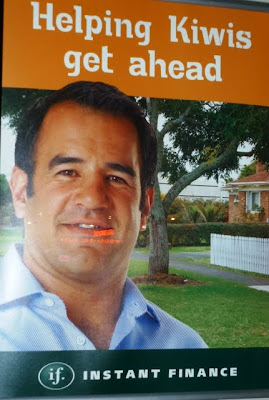 According to this Campbell Live video IF's profits have trebled and the loan shark's lending has gone up by almost 20% since the warrior-hero started being their pin-up boy.
One of TV3's planted examples is a woman who wants a $700 loan for school uniforms; Instant Finance quotes her an interest rate of 29.9% pa - and a fee of $415.
They also soundbite an industry guy saying that companies like IF expect their clients to default - in fact, they're set up for it; they get more money.
Stacy's fluorescent fat lip is my artistic rendition of what happens to the company's clients, in a metaphorical way.
Jones - Leave Jay... follow the shining example of Mike King!
Posted by SNARC at 2:25 AM 2 comments:

Email ThisBlogThis!Share to TwitterShare to FacebookShare to Pinterest
Labels: backdrop is as telling as a Renaissance painting, celebrity endorsement, finance, loan sharks

and they put a spice girls song in my head

In a disturbing new development in the footpath wars, an electricity company is trying to grab your feet with its hands: 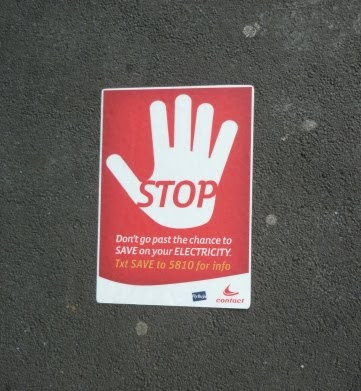 They've pooped these mouse pads all over the place. Is this really going to work?
Or are they just going to be the boy who cried wolf, in sheep's clothing, so to speak. Are people going to be annoyed they stopped to read this sign because it made them miss their bus and their boss Barry doesn't take shite public transport as an excuse for lateness any more, what with the new b-line and all, so that next time they see a danger sign they will ignore it thinking it's just another crappy Contact attempt to make contact, and this time they'll be driving their car, which then crashes through the barrier at the end of the dead-end road and falls off a cliff?
Tragedy. Luckily, it won't happen, at least not at the top end of Mt Eden road, because in Contact's defence these illegal litterings are more easily removed than stencilling.
Posted by SNARC at 4:08 AM 4 comments:

To put on my beret and stroke my goatee for a moment, there's a great quote from French novelist Andre Gide that goes something like: "To be loved is nothing. What I desire is to be preferred."
Ie, he wants to be loved most. 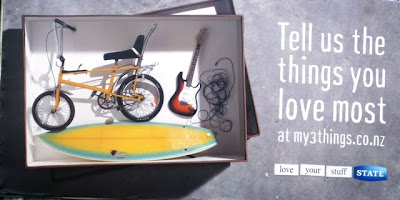 1. Musicals
2. The sense of Schopenhauerian relief I get just after meeting a deadline
3. The word 'squelch'
Can I get those wrapped in the blue sparkly paper?

Anyway, no thank you, State, I outrageously prefer not to squander my love on stuff, but keep it for people.
Posted by SNARC at 11:32 PM 4 comments:

sub editors: poets and they know it 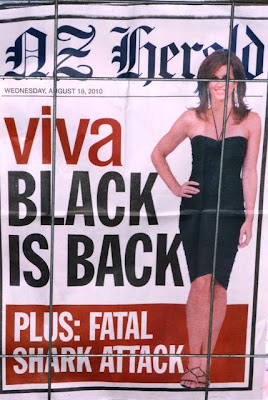 Black is back!
Plus fatal shark attack!
Equals widows weeds for someone on crack!
Somewhere close-by is a happy hardbitten hack!

haiku
The blood of death pools
at your feet as you model
black for "viva": life.
Posted by SNARC at 3:01 AM 6 comments:

don't say they didn't warn you

University Omnibus Part II: So apparently, really big institutions always have to deal with a certain level of financial fraud.
It doesn't excuse this, however: 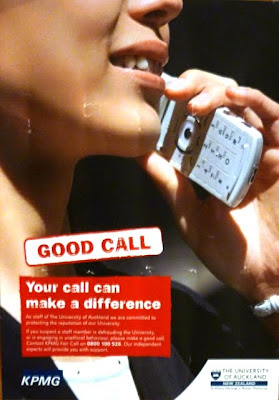 beauty and the brute

The science building is arguably the University of Auckland Building Most Likely to Harbour a Communist Bloc Dictator, uglier even than the engineering one.
And you see some weird things sticking out of it sometimes - tubes at awkward angles, first year chemistry students etc - for important experiments that Arts students like myself couldn't begin to understand.
But wait - what's this? 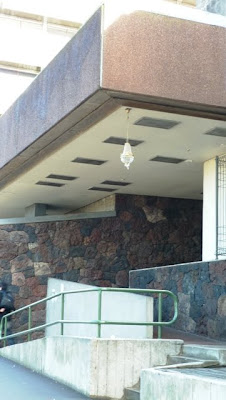 That's not an alum crystal, it's a baroque, fripperied, fol-de-rolled and curlicued chandelier! It's ruining the brutalist lines and transforming the building from an imposing behemoth in its own right to merely a contrasting backdrop for prettiness. Huzzah! 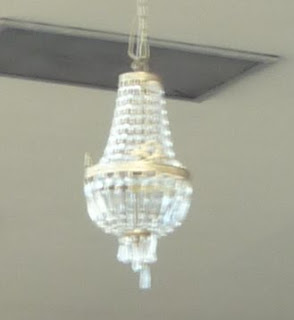 Twenty metres further down the road, outside the Information Commons, students go about their business in ignorance of such annexation and colonisation of the Science podium by frothy aesthetics: 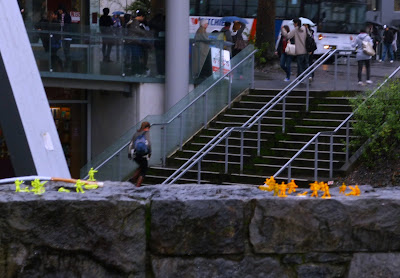 But wait - again, what's that?! A battle seems about to begin:

More chemistry fume induced hallucinations? Maybe one of the armies wants to cover the stone wall with some lacy fretwork to go with the chandelier. One can only hope!
Posted by SNARC at 3:30 PM 7 comments:

Shout-outs to my girl Donna, who grew up in Roskill South and went to May Road Primary School. You can now move back from overseas and never have to leave home again! 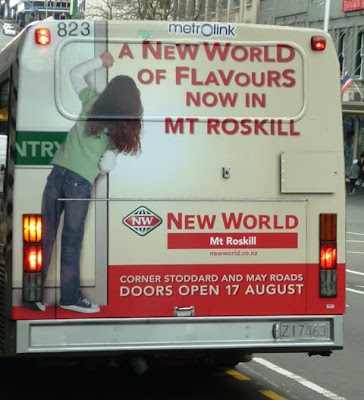 The hood must be weeping with relief that it's getting a supermarket to spread the good news about new flavas and teach everyone how to make tasty food, finally.
The goat flaps and taro, plantains and barfi from the Dominion Rd shops around the corner have always been sooooo banal.
And let's face it, the infinite flavours at Spice Invaders down Stoddard Road are pretty much all from the old-world.
Posted by SNARC at 4:03 AM 2 comments: 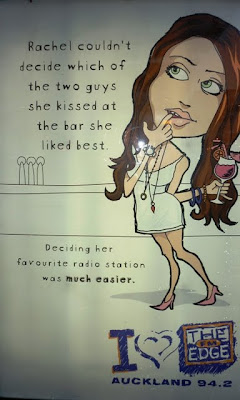 These two Edgy characters seem made for each other. 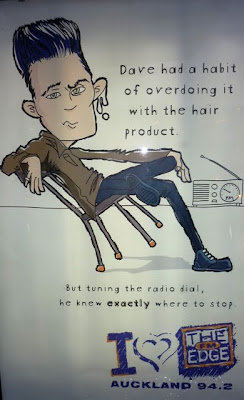 Lost souls with no personality or judgement of their own, looking to the herd to think for them. They'll bond over their love of Nickelback.
You know your audience extremely well.
Your honesty in letting the rest of us know what they're really like is commendable.
Posted by SNARC at 3:55 PM 7 comments:

Kiwi kids are weet-bix (if they're lucky) kids 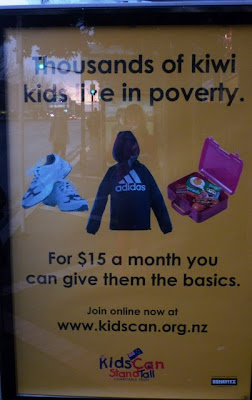 $15 a month is 50c a day. South Auckland is cheap at half the price!
This. Is. Sick. Not the "Kids Can Stand Tall" charity itself mind, but the fact that the need for the charity exists at all. They give out raincoats and shoes and socks and food - as they put it, they're "meeting the basic needs of Kiwi children". The basic needs? the BASIC NEEDS?!? Yes folks, they're not joking. Because nobody else is meeting those needs... and when I say 'nobody' I mean the government, of all recent shades. This is a national disgrace but it isn't a National-only disgrace.
Oh sure, the Ministry of Health is a "platinum sponsor"... right up there with the Number 1 Shoe Warehouse. The government vaccum has produced advertising opportunity for the Golden Arches, as a raincoat "partner". Kids in poverty in NZ have become a business promotion vehicle. Their unmet need is being "leveraged" in corporate board rooms. This strongly private model of distibuting wealth to the neediest is a very scary one. How are children such a low priority in this country? This is neglect and abuse of the most systemic kind. As the charity frames it, it's an educational need - you're not going to learn if you're at school hungry.
How is this level of need tolerated and acceptable? Kids Can Stand Tall is the official charity of the All Blacks. Apparently this country is happy to flaunt its child poverty to the world during the World Cup. Business as usual I guess, not so shocking. For shame!
PS The Child Poverty Action Group is holding an info evening for young 'uns under 35 on August 17 at the Auckland Medical School (click here and scroll down for details).
Posted by SNARC at 4:28 AM 4 comments:

There's nothing I like better than dobbing in corporates - corporates, mind, not cute little furtive rebels - who graffiti. Our shop walls are poster-busy and I like that, but when they vandalise our eye-restful, bland pavements, I'm as gleeful as the next old codger, ringing up the council on 379-2020 to ensure that beer ad, that movie ad, that weight loss group ad, is removed from beneath my feet.
"Is it offensive?" the helpful council call centre often asks. Yes it is - much more so than some naughty word tag or throw-up. Cluttering up the footpath so the company doesn't have to buy advertising space is cheap and nasty and deserves to be spat on.
Voila an example: 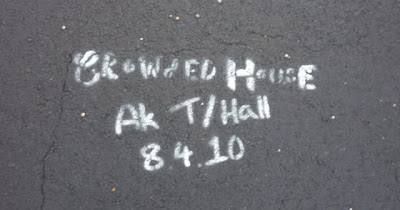 Neil - shame on your undies! It's even made to look like a waterworks marking, so that it's less likely to be spotted as vandalism (although surely that's less eye-catching for the fans too?). Whatever - it's STILL on my pavement four months after the fact.
I wish that the council would make the company CEOs (like Neil) and their ad persons scrub away at their footpath logos and slogans with a toothbrush and some icy water until they're gone - that fits in with the council's zero tolerance graffiti policy after all. If spray-painting public space and public property isn't beneath them, then punishment, in kind, isn't either.
Posted by SNARC at 3:19 AM 2 comments: